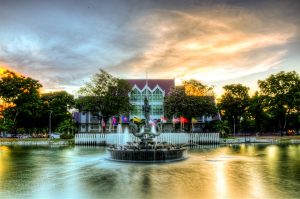 Kasetsart University emerged initially in 1938 at the Maejo Village in Chiang Mai as a unit of division rank of the Department of Agriculture and Fisheries of the Ministry of Agriculture with the name of Kasetsart College, literally meaning College of Agricultural Science. Its primary responsibility was offering three-year post-secondary educational programs in response to the personnel requirements of the Ministry of Agriculture. In 1939, it was transferred to the present location at the Bangkhen district in Bangkok, and the School of Forestry in Phrae Province was placed under its jurisdiction. The College offered post-secondary education programs in agriculture, cooperative science and forestry. 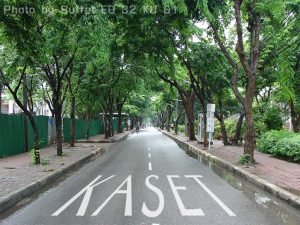 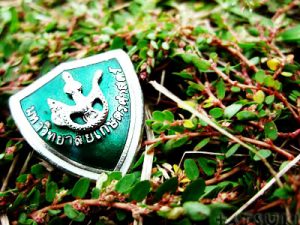 Kasetsart University has grown steadily and accomplished much through the years. Beginning as a small specialized university with only 182 students that emphasized agricultural science and offered only four bachelor’s degree programs, it has become a comprehensive university highly regarded nationally and internationally. The main campus is in Bangkok. There are presently three other campuses in the Central Region: Kamphaeng Saen in Nakhon Pathom Province, the Suphanburi Campus in Suphanburi Province, and the Lopburi Campus in Lopburi Province, one campus in the Southern Region: the Krabi Campus in Krabi Province; and one campus in the Northeastern Region: Chalermphrakiat Campus in Sakon Nakhon Province. Moreover, the University maintains all together 16 research stations, five field stations, six national stations, and 57 research centers and training centers in all regions of the country. The University celebrated its 60th anniversary and its 100,000th “pundit” (graduate) in academic year 2003.

The university symbol is Phra Phirun (or Varuna), the god of rain, mounted on a naga, or giant serpent, encircled by lotus petals and then by the words “Kasetsart University B.E. 2486.” The University color is green and the university tree is the Nonsri (Peltophorum pterocarpum)

KIMBA Office Hour due to COVID-19